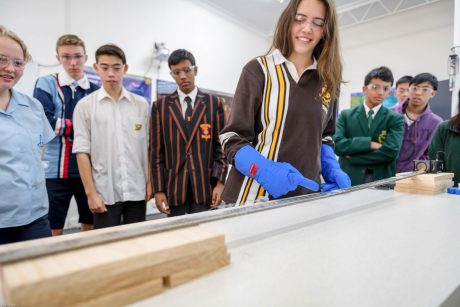 Below is the syllabus content covered by these lessons (this is a copied from the official syllabus page: https://syllabus.nesa.nsw.edu.au/physics-stage6/content/1208/)

Motion is a fundamental observable phenomenon. The study of kinematics involves describing, measuring and analysing motion without considering the forces and masses involved in that motion. Uniformly accelerated motion is described in terms of relationships between measurable scalar and vector quantities, including displacement, speed, velocity, acceleration and time.
Representations – including graphs and vectors, and equations of motion – can be used qualitatively and quantitatively to describe and predict linear motion.
By studying this module, students come to understand that scientific knowledge enables scientists to offer valid explanations and make reliable predictions, particularly in regard to the motion of an object.

In this module, students focus on designing, evaluating and conducting investigations to examine trends in data and solve problems related to kinematics. Students should be provided with opportunities to engage with all the Working Scientifically skills throughout the course.

Motion in a Straight Line

Inquiry question: How is the motion of an object moving in a straight line described and predicted?

Students:
● describe uniform straight-line (rectilinear) motion and uniformly accelerated motion through:
– qualitative descriptions
– the use of scalar and vector quantities (ACSPH060)
● conduct a practical investigation to gather data to facilitate the analysis of instantaneous and average velocity through:
– quantitative, first-hand measurements
– the graphical representation and interpretation of data (ACSPH061)
● calculate the relative velocity of two objects moving along the same line using vector analysis
● conduct practical investigations, selecting from a range of technologies, to record and analyse the motion of objects in a variety of situations in one dimension in order to measure or calculate:
– time
– distance
– displacement
– speed
– velocity
– acceleration
● use mathematical modelling and graphs, selected from a range of technologies, to analyse and derive relationships between time, distance, displacement, speed, velocity and acceleration in rectilinear motion, including:
– ⃗ = ⃗⃗t + ⃗t2
– ⃗ = ⃗⃗ + ⃗t
– ⃗2 = ⃗⃗2 + 2 ⃗ ⃗ (ACSPH061)

Motion on a Plane

Inquiry question: How is the motion of an object that changes its direction of movement on a plane described?
Students:
● analyse vectors in one and two dimensions to:
– resolve a vector into two perpendicular components
– add two perpendicular vector components to obtain a single vector (ACSPH061)
● represent the distance and displacement of objects moving on a horizontal plane using:
– vector addition
– resolution of components of vectors (ACSPH060)
● describe and analyse algebraically, graphically and with vector diagrams, the ways in which the motion of objects changes, including:
– velocity
– displacement (ACSPH060, ACSPH061)
● describe and analyse, using vector analysis, the relative positions and motions of one object relative to another object on a plane (ACSPH061)
● analyse the relative motion of objects in two dimensions in a variety of situations, for example:
– a boat on a flowing river relative to the bank
– two moving cars
– an aeroplane in a crosswind relative to the ground (ACSPH060, ACSPH132)